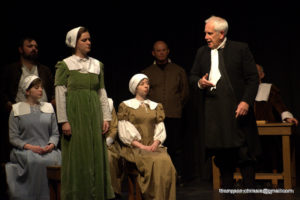 The Rococo Players were pleased to present their production of Arthur Miller’s The Crucible in November 2018, which has been described as a classic of the modern stage and one of the greatest American plays of all time.

A wife is sentenced to hang for reading books; men and women are imprisoned or executed because they have been “seen” with the Devil; children are punished for dancing…. not the happenings in some dystopian fictional world but events that occurred 300 years ago during the early years of European settlement in North America and brought to the stage next month in Arthur Miller’s timeless play “The Crucible”.

Arguably the greatest play in the modern era, Arthur Miller’s “The Crucible” is based on real events in the town of Salem, Massachusetts in 1692, at a time when the residents of New England lived a life of strict religious conformism. As the play opens, a group of young women gather in the woods to dance and to conjure spirits. The town is soon gripped by accusations of witchcraft, its people living with a rising sense of fear and dread, and nobody knows where the finger of suspicion will point next.

Written at a time when the Cold War was at its height and Miller himself was accused of having communist sympathies, the historical events of 1692 became an allegory for his own experiences. Echoing down the ages, the story of the Salem witch trials still finds resonance and relevance in our own troubled times.

Rococo Players’ production of Arthur Miller’s The Crucible opened in Cheltenham last week and has been met with universal acclaim. Here are extracts from some of the many messages we have received from audience members:

“What a powerful production!”

“Really, really enjoyed the play – couldn’t believe it was amateur. Well done all.”

“Thank you so much for last night. The production has lived with me all day. The staging was immaculate, the pacing excellent and the tension palpable”

“What a splendid production! We all were thoroughly engrossed till the very end.”

“It was our first Rococo players production and we will come to see future productions based on tonight’s success.”

“Couldn’t believe it was an amateur production”

“Left the theatre with much thought and reflection on how there are so many similarities to today’s world.”

This week is your last chance to see this outstanding production.

Tickets cost £15 (£12 for concessions) and can be bought online at: www.therococoplayers.org.uk or by ringing 07764 455345.
Wheelchair access is available with prior notification. Please contact 07764 455345 to arrange your booking.

Don’t miss this opportunity to see what many regard as the most dramatic and exciting American play of the 20th century….